There are many hill and mountain peaks around Serra from where one can enjoy a stunning view over the Calderona mountain range, the Horta county and the gulf of València. On the horizon, one can see all the mountains that mark the limits of the province, and even far beyond. On clear days, you can also see the Columbretes Islands from the L’Alt del Pi or from the triangulation station of Rebalsadors. There are four settings in Serra that serve as viewpoints.

Viewpoint of Mireia or Rebalsadors

This the highest scenic viewpoint in Serra. It is located 760 metres above sea level and next to the peak it is named after: the Rebalsadors mountain (802 metres), a first-class triangulation station. It is part of the hiking itinerary number 3 (Rebalsadors). It was built during the seventies of the past century. There are three balconies and two small open shelters.

The views from this point are spectacular and allow us to see how the mountain slopes slowly descend until they reach the Mediterranean Sea.

To the south-east, one can see the villages of the Horta county and the city of València. The perfect silhouette of the gulf of València, the lake of L’Albufera, the town of Cullera and the cape or Sant Antoni are also visible. Looking to the right, one can see as well the impressive Montgó massif and the Bèrnia mountain range, and very important mountain peaks such as Ponoig, Mondúver, Puigcampana and Aitana. In this direction, the mountain ranges of Benicadell, Mariola (with its highest peak, Montcabrer) and El Menejador are also visible. Towards the south-west, one can see the Caroig massif, the Perenxisa mountain range and the county of Camp de Túria with its towns and villages, like Les Rodanes and Porxinos. Towards the north-west, there is the mountains from La Serrania, the Gorgo peak of Serra Calderona, the mountains of Javalambre (topped with snow during winter) and the mountain from El Toro.

At the foot of the Rebalsadors mountain, one can contemplate the town of Serra, the plain of El Lluc and the valley of Lullén (with the Porta Coeli charterhouse and its impressive Gothic aqueduct) (link to Porta Coeli charterhouse) and the country house of La Pobleta. The monastery of Porta Coeli was the first one of the Carthusian order in Valencian territories. It was founded in 1272 by Andreu d’Albalat, confessor to king Jaume I. In this charterhouse, the Bible was translated to Valencian for the first time by Bonifaci Ferrer, brother of València’s patron saint Sant Vicent Ferrer. La Pobleta, which originally belonged to the Carthusian monks, was the residence of the president of the Second Spanish Republic Manuel Azaña, when in 1937 the Republican government settled in València. “Here in this countryside, there is absolute silence, Mediterranean sun, the smell of flowers. It seems like nothing is happening in the world”. This is how Azaña described the atmosphere in Serra Calderona in his diary Cuaderno de La Pobleta.

And why this viewpoint is also called ‘Balcony of Mireia’?

The balcony of Mireia is popularly known as Rebalsadors, but from the 20th of March in 1998 has this new name by agreement of the local government. The change of name was due to a proposal by a group of hikers who wanted to pay tribute to Mireia, a young woman involved in hiking groups who sadly passed away too soon. Mireia loved Serra Calderona above all else and she thought of it as home. This young woman was committed to the environment and participated in reforestations. She was also an instructor of leisure activities for a while, and she conveyed to children her passion for la Calderona. 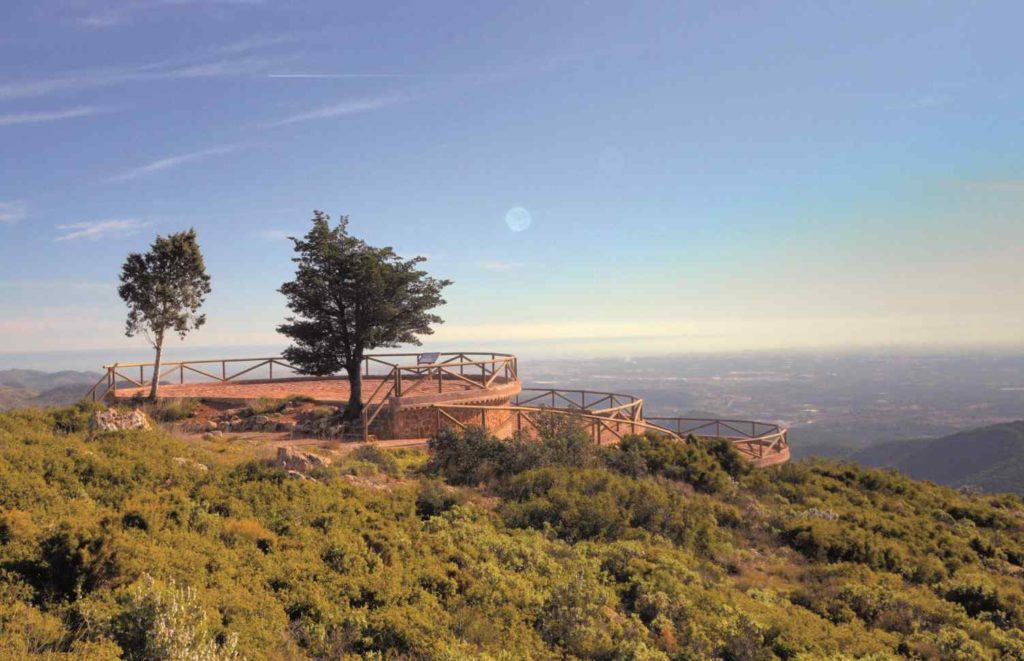 Viewpoint of the plain of Les Llomes

The viewpoint of the plain of Les Llomes (also known as ‘Del Viscaïno’) is located 602 metres above sea level. It offers incredible views of the town of Serra and the valley on which is settled.

One can see as well different nearby areas, such as the spring of L’Ombria, Ria, Tóixima and Serra’s Castle (link to Castle hiking itinerary). To the east, one can see the mountains of Moncúdio, Pinar and Serra’s Castle, as well as the Horta county and part of the Camp de Túria county. To the south-west, one can see the coastline, the Montgó massif, the mountain ranges of Bèrnia, Aitana and Mariola and the Caroig massif. To the west, there are the mountains of Gorrisa and Rebalsadors and to the north-west, El Cierro mountain.

You can access this viewpoint from Serra, following the CV-310 until the mountain pass of L’Oronet, where you need to take CV-334. The entry is on the right margin of the CV-334 road, after passing the machine-gun nests built during the Spanish Civil War.

The viewpoint of La Pedrera (also known as ‘of Broseta’) offers the best views over the majestic Porta Coeli charterhouse. Beyond the monastery, to the north, there is the Rebalsadors mountain, a landmark for Valencian hikers, and El Cierro de la Mata. To the south, there is the extensive pine grove nearby the Doctor Moliner Hospital. One can see the city of València and the sea from there as well. Next to the viewpoint, taking the Porta Coeli charterhouse as reference, there is a quarry of calcareous rocks of the mid-Jurassic period. It has been exploited since about 1400. The quarry belonged to the Carthusian monks. The material for building the charterhouse was extracted from there.

It can be accessed taking the road CV-310 road from Serra to València. After passing the cemetery, take the CV-328 until you reach the recreation area of Broseta, at the 4,9-kilometre milestone. From there, you should continue on foot following the forestry track until you reach the viewpoint. It is part of the yellow hiking itinerary (Porta Coeli) of the Serra Calderona Natural Park that starts at the crossroads with CV-331.
http://www.parquesnaturales.gva.es/web/pn-serra-calderona/ruta-amarilla-descripcion

The viewpoint of L’Abella offers great views over the plain of El Lluc and the valley of the Túria river. To the north, there is the impressive top of the Rebalsadors mountain. To the south, the sea and the Montgó massif.

You can access it from Serra taking the CV-310 road heading to Valencia. After passing by the cemetery, take the CV-328 to the right and continue until you can take CV-331. This junction, next to the recreation area of the plain of El Lluc, is the starting point of the forestry track of El Campillo. Continue on this forestry track heading to the cave of Soterranya. From there, next to an old cistern, there is a forestry track to the right that passes by the spring of La Gota and leads to the viewpoint.