A church makes a town, and Serra’s people are very proud of their temple, dedicated to the Mare de Déu dels Àngels (Virgin of Angels), one of the town’s patron saints. The church, as it stands today, was finished in 1800 and it is the result of several ampliations. It stands on the base of older, primitive churches that were replaced as the population increased. 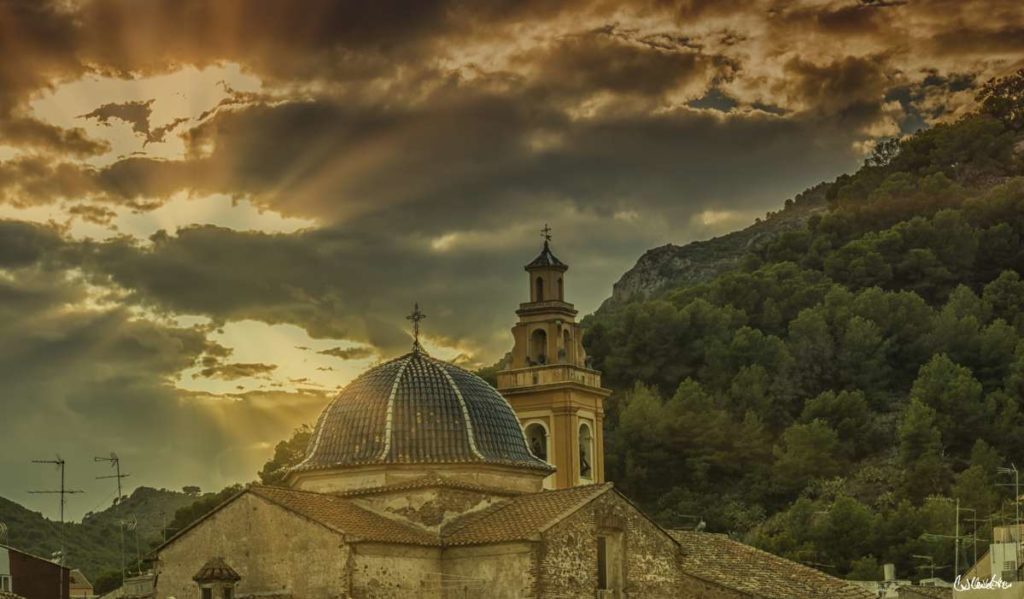 Valencian architect Francisco Pechuan designed it in neoclassic style. It has a single nave with pilasters, semi-circular arches and a semi-circular barrel vault over the main nave. The dome rises over the crossing on four pendentives, where the four evangelists are depicted. They are the work of Remigio Soler. Behind the main altar, there is a small chapel dedicated to the Mare de Déu dels Àngels, of whom the people from Serra are extremely fond. The church and its clock tower are listed as relevant local heritage.
Serra i el Sant Calze

Serra’s parish link to the Holy Chalice dates back to the fifties of the 20th century. Pilgrimages from the parish to the Valencia Cathedral to see the Chalice were common around the time and, in of them, Serra’s parishioners presented the Cathedral with the Llibre d’Or del Sant Grial (a guestbook for the Chalice). For this reason, on the 4th of November 1951, Serra’s parish was declared ‘Benemèrita del Sant Calze’, a special honour given by the Valencian Catholic authorities. This fact is recorded in honorary diploma that hangs from one of the crossing’s walls.

The book was paid with voluntary donations, rifles, and fairs and by selling local craft products made of esparto, a sort of hard grass which women worked at home to elaborate strings and plaited cords that would be used to make baskets and sandals.