The city council through the Tourism area has finished the Installation of signs and explanatory panels along a bicycle route of mountain that runs entirely through the municipal term, always within the Park Natural of the Sierra Calderona and that has the support of Turisme Comunitat Valenciana.

The Ruta de las Fonts de Serra runs through the main springs of the municipality nestled in the heart of the Sierra Calderona through 38 kilometers of forest track and a slope accumulated from 1175. The route highlights the natural, ethnological and monumental heritage from the town through a circular route starting and ending at the Tourist Info.

The route places special interest in the importance of the waters of the Serra springs that gave place to the traditional office of the water carriers, now disappeared. All without neglecting nature and heritage since the route also passes through three monuments declared BIC, the Catell de Serra, the Cartuja de Portaceli and the Torre del Señor.

“We continue betting on tourism from the municipal government with this cycling route that the municipality recovers by valuing our natural, ethnological and monumental” comments the mayor of Sierra, Alicia Tusón, who emphasizes the “effort investor” in tourism and heritage in recent years. In total, l 45 signals spread over 18 new posts in addition to those that already existed and have been reused.

Three information panels have also been installed, one for the start of the route together to the Tourist Info, one of the situations and one that explains the job of the aguaderos in spring of the Ombria. An investment of about 18,000 euros financed 65% by Tourism
Valencian Community. 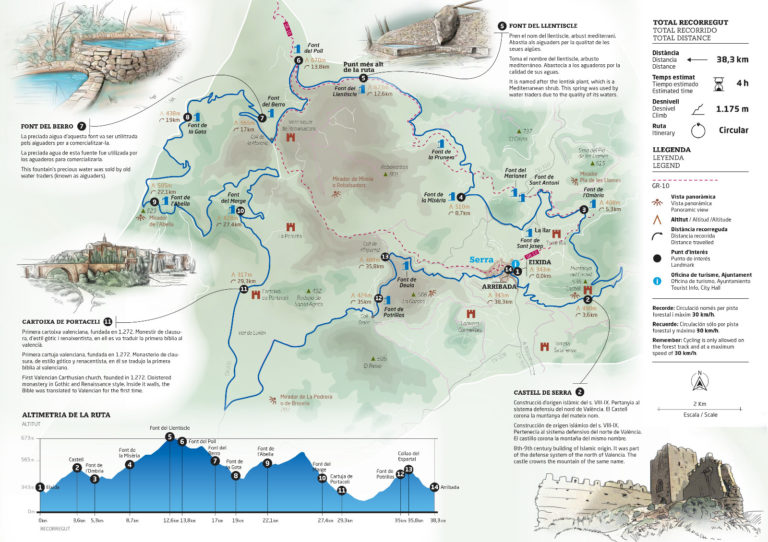